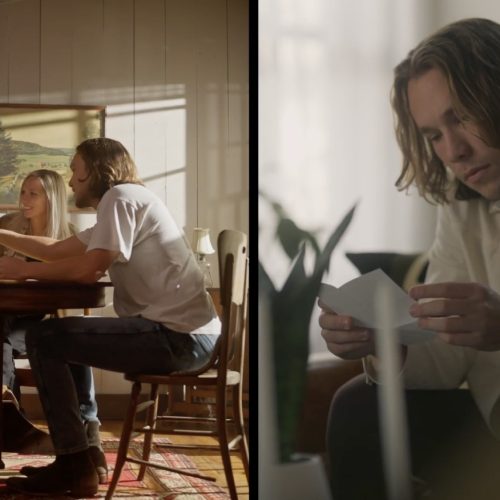 “…a folkie, bluegrassy texture that ripples with authenticity.” – Music Row

NASHVILLE, Tenn. – Over the last few weeks, Brandon Ratcliff released a series of songs to kick off a new chapter in the Cotton Valley, Louisiana native’s life. Songs that tell the story of what the singer/songwriter spent the last two years discovering, questioning, and wrestling with: who he is as a man and as an artist.

The songs are the result of Ratcliff re-connecting with the tradition of storytelling his family has followed for so long. A tradition his mother Suzanne Cox of the legendary, and multi-GRAMMY Award winning bluegrass group, The Cox Family, kept alive and well in their home. The first release and title track of his forthcoming album on Monument Records, “Tale of Two Towns,” deals with the waterfall of consequences and rewards that come with leaving your hometown, while “ Always Moving On” explores the need to keep moving so you’re not left behind. Today, Ratcliff releases “Grow Apart,” a song, in the 24-year-old’s own words, that is about “the passage of time and all the different versions of ourselves we become through the years. Little by little, we are always changing who we are, and we either grow together or grow apart.”

Written by Ratcliff with Lori McKenna and Peter Good, and produced by Good with AJ Babcock, “Grow Apart” is available Today.

Autobiographical and honest for Ratcliff, the overarching theme in each of these tracks is the consequences of our actions. Through these songs he questions if he made the right decision leaving his hometown to pursue his dreams, yet unable to imagine what would become of him had he stayed.

Unsurprisingly, Ratcliff is finding that many of his peers, friends, and listeners have struggled with those same questions, and today, he announces a full project that continues that exploration.

“For years I feel like I was wandering aimlessly through the wilderness of my own mind,” shares Ratcliff. “But that wandering ultimately led me to where I am today, and to this record. I was looking for meaning, and in 2020 I finally had a second to pause and ask myself why I was doing what I was doing, and wrestle with some hard questions. It allowed me to be a lot more vulnerable in my songwriting, and I’m really proud of each and every song.”

Tale of Two Towns is a sonic shift that Ratcliff has worked hard to identify since signing with Monument Records in 2018. After releasing his debut single, “Rules Of Breaking Up,” in October of that same year and accumulating over 50 million streams, he hit the road with Kelsea Ballerini and Brett Young, and opened dates for Keith Urban. He appeared on the Spotify Viral Chart and was selected as a Pandora Ones to Watch artist, while topping Rolling Stone’s all-genre Breakthrough Artists chart. A new artist on the rise.

Yet when 2020 hit and the world shut down, Ratcliff found himself at a crossroads with his music, his sound, and his life, so he went back to the hometown he was so eager to leave. While there he wrote nonstop, sharing truths he had never shared before, and put together a career defining record.

On Tale of Two Towns, Ratcliff emerges confident and at peace on the other side of so much self-discovery. “I hope this record feels like a fresh handshake that says ‘hey I’m Brandon Ratcliff,’” adds the musician. “I hope people can see themselves in it, and in the questions that I ask myself and the things I struggle with. I hope this is just the beginning of our evolution together.”