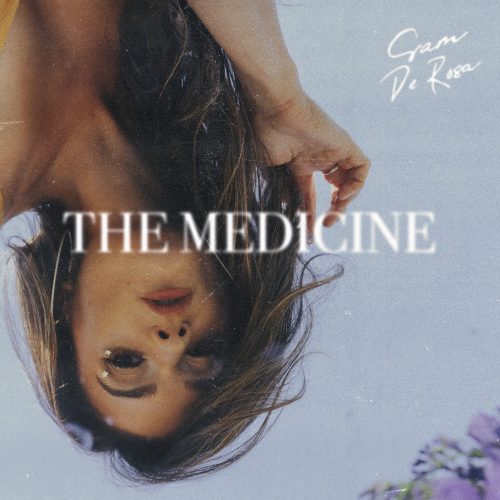 The highly anticipated 6-track EP from Sam DeRosa is an honest storybook outfitted with relatable lyrics applauded by American Songwriter, Billboard, Flaunt, PARADE, PEOPLE, Refinery29, among many others. Upon graduating from Berklee College of Music, the NY-raised and LA-based artist co-wrote “Broken” – the multi-platinum smash hit by lovelytheband now marked the longest charting alt-pop-rock song in radio history. Sam’s credits have grown exponentially since, including cuts with Dixie D’Amelio on her groundbreaking #1 debut “Be Happy” featuring blackbear and Lil Mosey (which has surpassed 100M+ streams), Adam Jensen, Jared Lee, Peking Duk and Alisa Xayalith (of The Naked And Famous), Welshly Arms, and more. Now, after years of honing in on her craft and helping others find their voice, Sam DeRosa shines in her own spotlight and gets her due on The Medicine.

A sincere glimpse into the singer-songwriter’s sensibility, the EP opens with “Unfinished.” Sam notes, “I really wanted ‘The Medicine’ to start the whole EP and I knew that I wanted to touch on this idea that maybe this is what it is. Maybe we are just meant to be open-ended and there’s no ending, and there’s no reason for that?”

Also featured on the EP is fan-favorite release “Sad Faces” which comes at a time where we all need to take a moment to pause for a mental health check. The songwriter behind mega-hit “Be Happy” by Dixie D’Amelio continues to step into her own, her slick vocals eclipsing over a magnetic drumline that has you hooked instantly and positions her as not only a force behind the scenes but as a welcomed face in the incredible squad of artists who are sharing ‘sadgirlpop’ with the world (à la Julia Michaels and Sasha Sloan).

Other songs that complete the body of work include “321” and slow-burner “The Medicine.” Penning the track from her own experience bumping into an ex, “321” perfectly captures the universal emotional turmoil that takes over you from the unexpected encounter. On the title-track, Sam says, “I’ve always wanted to write a song called ‘The Medicine’, but I didn’t realize that it would end up being a part two to ‘Pill For This’. This whole body of work is meant to be the start to finish of my journey to closure and surviving…”

The EP closes out with none other than “Pill For This” – the song that uprooted the trajectory of her music career forever, following her SONGLAND appearance on S1E1 with fellow Berklee student and pop artist Charlie Puth. While “Pill For This” began as a quest for the cure to a broken heart, the life of the track itself has evolved a hundred times over and ultimately opened a door to a new season for self-love, acceptance, and prosperity for the rising star.

“The whole idea of my EP is supposed to feel like I’m walking myself through my own love rehab. From track one until the final track, I really wanted it to feel like each song is a full day of healing.” Sam DeRosa elaborates, “Hopefully someone will hear this and feel like I’m right there with them – whether we are stumbling home, dancing around the house, or crying it out on the bedroom floor. I’ve been there, so I’ll sing them through it.” She also asserts, “There are a lot of people who can’t process what they’re feeling, so my responsibility as an artist and songwriter is to speak my truth as best I can with the hopes that it will help someone else who’s hurting.”

Equal parts cool girl and the girl next door, Sam DeRosa is the best friend music lovers didn’t know they had.

Looking back, it’s surprising that the NY-raised and LA-based singer-songwriter didn’t often share her music with those around her. Although she began writing her own songs at a very young age, Sam would opt to perform cover songs whilst competing in talent show after talent show – only to lose out to other contestants. At 15, she decided to bring her keyboard onstage to sing one of her own written songs. Staying true to herself, she was finally awarded a perfect score. It was then that she discovered the formula to success and began to embrace her newfound confidence.

Following a remarkable performance of her original song “Pill For This” on SONGLAND (with special guest Charlie Puth), Sam DeRosa instantly stole judges Shane McAnally, Ester Dean, and Ryan Tedder’s hearts in 2019. While Sam is far from just any overnight TV series success, it was this moment of utter vulnerability that sparked her partnership with multi Grammy Award-winning songwriter and producer Shane McAnally (Kacey Musgraves, Kelly Clarkson, Sam Hunt) and her first major record deal with Monument Records (a joint venture with Sony Music). Sam tells PEOPLE, “I never in a million, trillion years thought that it would happen this way… I’ve been waiting tables and bartending, singing cover gigs and missing holidays with my family for gigs that only paid $50. I always thought, there’s no way when you put this much energy into something that can’t work.”

Upon its release in 2019, “Pill For This” landed on the Top 5 US iTunes Sales Chart and has racked up over 4M streams to date. The single was also featured across several notable playlists including Spotify’s New Music Friday and Chilled Pop Hits, Apple Music’s New Music Daily and A-List Pop, as well as Amazon’s Introducing Pop and Brand New Music. American Songwriter commended Sam for her “heartfelt delivery and ability to pinpoint an infectious melody” while HollywoodLife praised the visual component for “accurately capturing the strife and struggle that comes when trying to pick up the pieces after a broken heart.” Billboard later premiered the stripped down version of “Pill For This,” closing the chapter of her life as just a writer behind the scene and primed her for pop stardom.