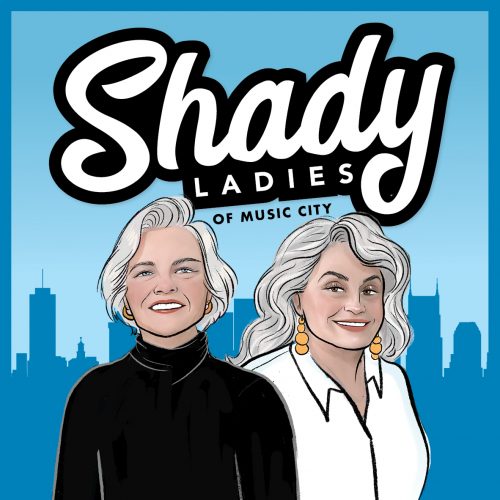 If you’ve never heard of Susan Nadler or Evelyn Shriver, they have almost certainly impacted your life. Over the course of more than forty years in the music industry, they turned unknown artists into legends, shattered glass ceilings, smoked pot with everyone, including Willie Nelson, and eventually became the first two women ever to run a country music label when they took hold of Asylum Records in 1998.

Now, Susan and Evelyn are ready to share the unbelievable tales, tribulations, and backstage stories they lived through with hilarious, often brutal, honestly on the “Shady Ladies of Music City” podcast.

Listen to the trailer HERE.

Starting their careers as publicists, Susan and Evelyn moved to Nashville in the 1980s and quickly set out to flip music row on its head. Building a network of artists around them including George Jones, Willie Nelson, Randy Travis, Tammy Wynette, Lorrie Morgan, Cher, and Diana Ross, they were integral in crafting the country music soundtrack of the 1980s and 90s. Infiltrating the good ole boys club of Music Row, they did things their own way and were recognized by the Nashville Scene as “leading the next wave of female music industry executives” at the time.

Ready to talk about everything from finding true friendship in an often cutthroat industry, to being named honorary pallbearers at George Jones funeral, to getting arrested in Mexico, to roller skating with Cher, the ladies are holding nothing back, and sharing the country music history they witnessed first-hand.

Equal parts music, comedy, and female empowerment, “Shady Ladies of Music City” is a tell-all podcast recorded and produced in Nashville, TN and brought to you by Monument Records.

We really don’t know what they might say, so come “light one up and lighten up” with us.

The first full episode of “Shady Ladies of Music City” will go live Tuesday, June 4th, with weekly episodes to follow, including artist and industry guests, until Season 1 completes in early August.

Appearing as part of Music Biz, the ladies will be speaking on a panel on Wednesday, May 8th at 9:00pm. For more information visit Music Biz 2019.

For more information about Susan and Evelyn, visit ShadyLadiesOfMusicCity.com

P.S. We have all heard a rumor about a country music icon, Nashville, or the music industry. If you have one you want the Shady Ladies to address on the podcast, enter it HERE.