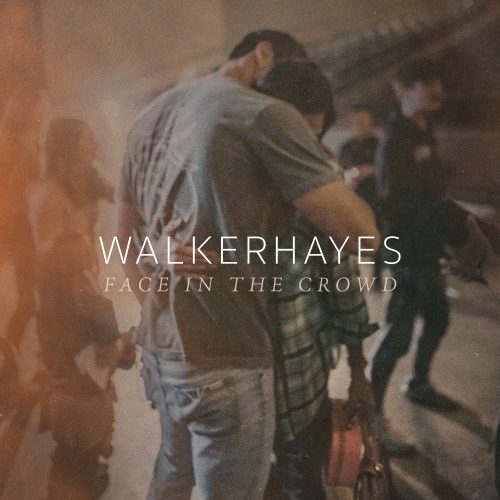 “I was honored to be nominated for a CMA Award, but the acceptance speech I would’ve made dropped just now… it’s called Face in the Crowd” – Walker Hayes

NASHVILLE, Tenn. – Anyone who has listened to Walker Hayes’ music knows his wife Laney is his biggest muse. Whether he’s taking her out for a date night at Applebee’s in “Fancy Like,” trying to keep her from figuring out that he married up and she married down in “AA,” or thinking about how he can keep her happy even after he’s gone in “Don’t Let Her,” all he wants to do is make her happy.

That has never been more apparent than in his newest song, “Face In The Crowd.” He sings:

Written by Hayes with Emily Falvey and Tofer Brown, and produced by Hayes with Joe Thibodeau, the second the song was finished, Hayes began playing it during his pre-show hang while out on his Glad You’re Here arena tour. Immediately, his fans began asking when they could get their hands on the track. Laney, a side stage staple at every Hayes show, is never one to seek the spotlight, but is beloved by fans after making appearances in countless TikTok videos to reluctantly dance beside Hayes.

The song is especially meaningful after a breakthrough year for Hayes and his family that saw the superstar earn a GRAMMY nomination, six Billboard Music Awards nominations, five ACM Awards nominations, a CMT Awards nomination, a CMA nomination and his first No. 1 at Country radio. With success coming nearly 20 years after he started making music in this town, Hayes knows that at the end of the day all that matters is Laney and his six kids.

“I can’t say how grateful I am for the last year of my life. It changed a lot for me and my family, but at the end of the day, money doesn’t fix anything,” says Hayes. “We’ve been doing this a long time, and we were happy when we were poor, too. We’re just lucky to have each other, and that’s really all that matters”

Last night’s 56th CMA Awards ceremony marked Hayes’ first-ever CMA nomination, where he was up for New Artist of the Year. Though he didn’t win, “Face In The Crowd” is his message to Nashville, his fans and his family. Says Hayes. “I was honored to be nominated for a CMA Award, but the acceptance speech I would’ve made dropped just now… it’s called ‘Face in the Crowd.’”

Listen to “Face In The Crowd” HERE

“Face in The Crowd” is the latest release from Hayes, complimenting current single, “Y’all Life,” which is climbing the chart at country radio. These tracks, plus smash hit “Fancy Like” and fan favorite “AA” have made Hayes one of the top streaming artists in country music.

Watch the video for “Face In The Crowd” HERE

ABOUT WALKER HAYES:
Monument Records recording artist Walker Hayes is a singer/songwriter originally from Mobile, Alabama. Last year, his smash hit “Fancy Like” topped every country music sales and streaming chart, spent more than six months at the No. 1 spot on the Billboard Hot Country Songs Chart, hit the top 5 on Billboard’s Hot 100 Songs, hit No. 1 at country radio, and gave Hayes his first GRAMMY Awardnomination as an artist for Best Country Song. The song was also featured in a nationwide Applebee’s commercial. That track, as well as follow up single “AA,” and current single “Y’all Life ,” have made Hayes one of the top selling and streamed artists in country music.